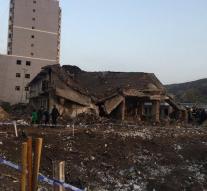 xinmin - A heavy explosion in the Chinese city of Xinmin has claimed at least ten lives. Certainly 157 others were injured. The enormous blow took place in or near a prefab house in a residential district. The cause is still unknown.

Many houses have been destroyed by the blast. A whole apartment was wiped out. A nearby hospital would be severely damaged. Around the spot where the hit took place, a large crater about 2 meters deep was beaten. Dozens of firefighters and other rescuers dig through the rubble for victims. Many wounded are in a bad way when, according to local media.

Chinese newspapers claiming that there were explosives illegally stored in the conscious prefab home.