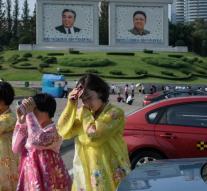 geneva - The Red Cross fears a new famine in North Korea due to the heat wave on the Korean peninsula. The harvest of rice, maize and other crops threatens to fail and has 'possibly catastrophic consequences', warns the international aid organization.

This can lead to a huge food crisis in the isolated communist country, which sighs under international sanctions. According to the Red Cross, the population is already vulnerable due to food shortages. The malnutrition of children can worsen.

Last year in August, the worst drought threatened the food supply of millions of North Koreans in twenty years. UN organizations denounced the regime in North Korea, which mainly puts money into the development of nuclear weapons. An important part of the harvest was then also lost.

At the time, the United Nations pledged 6.3 million dollars (5.3 million euros) to cover the shortage of grain, rice, maize, potatoes and other food.