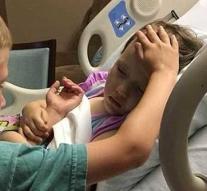 - The father of the 4-year-old Addy Sooter shared a heartbreaking photo on Facebook. The little girl was dying, and her older brother Jackson (6) did not want to leave her side. 'A little boy should never say goodbye to his 'partner in crime', his playmate, best friend and little sister.'

She was barely older than two when doctors discovered a brain tumor with the little Addy from Arkansas. Removing the tumor surgically was not an option, but after 33 radiotherapy the doctors thought they had overcome the cancer. Unfortunately, it did not start to develop again much later.

Addy had to fight against 'diffuse intrinsic pumping glioma', a rare form of cancer that mainly occurs in children between five and nine years of age. The tumors develop at the bottom of the brain and at the top of the spine. Over time, the tumor interferes with the heartbeat, breathing, sleeping pattern and blood pressure of the patient.