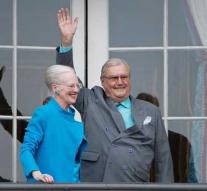 copenhagen - The health situation of the Danish prince Henrik has deteriorated considerably. Crown Prince Frederik therefore stopped his stay in South Korea where he would attend the opening of the Olympic Games. The crown prince is now on the way back to Denmark.

The 83-year-old Henrik was admitted to hospital in Egypt with pneumonia at the end of January and then transferred to a hospital in Copenhagen. A benign tumor was discovered there in his left lung.

Last year, the husband of Queen Margrethe was also admitted several times. Thus he was operated on his groin and pelvis because of a narrowing of the arteries in his right leg. It was also known that he suffers from dementia.