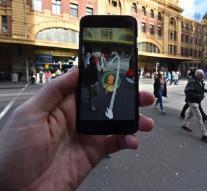 - It's just a game, but catching Pokémon figurines with your smartphone starts here and become a pest. This is clear from messages on Twitter, among other police forces.

The police have their hands full with reports of suspicious and sometimes dangerous situations around the game. Since the app was launched a few days ago, Pokemon Go hype worldwide. The intention is that the user captures the familiar characters from the TV series Pokemon with his smartphone. For non-users, there is nothing to see, it is a virtual world that can only be seen through the camera of the phone is.

The result of the hype is that players take to the streets individually or with a group to catch the creatures. This happens day and night. The players have eyes only for the smartphone screen and, according to the police make dangerous situations. Reports about were among the police Eindhoven and Haarlemmermeer.


The Eindhoven police tweeted:,, Just targeted group who ran towards the center. All a cellphone in hand with eyes only for the display. When addressing one appeared to be looking for Pokémon. So you still learn every day what. '

The Academic Medical Center Amsterdam (AMC) also had to deal with Pokemon Go. There are people walking around in areas prohibited for visitors. In a tweet reported the hospital:,, There is a sick Pokémon in the AMC- we'll take care of him. We would appreciate it if you'm not visiting '

Moreover, the app, created by Nintendo, not yet officially available in the Netherlands. is it still possible to download here via digital shortcuts.


If blind people look at their phone screen to play Pokemon Go, without looking around,,, it is inevitable that the number of fatalities will increase. ' Before that warns Traffic Safety Netherlands Tuesday. Each year, an estimated ten to one hundred people died in traffic because they or others are busy with their mobile phone.

The organization calls on people to be responsible.,, People are so immersed in the game that they do not perceive their environment. There's insecurity, for yourself and for other road users, 'says a spokesman.