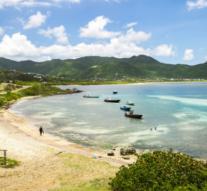 - On Sint Maarten Monday morning arrested the 35-year-old owner of security firm Checkmate Security. He is guarding the port of St. Maarten and is suspected of tax evasion, forgery and money laundering.

Has seized a number of bank accounts of the man. Also, in cooperation with the authorities on the French part of the island seized a yacht.

The research is part of the Netherlands supported intensive tackling transnational corruption and fraud in St. Maarten, including corruption and money laundering fall. This is done by the team combat subversion (TBO) of the Criminal Investigation Team (RST).

Employees of Checkmate Security were involved earlier this year in a drug deal that ran out of control and which people were shot.

The suspect is a childhood friend of Frans Richardson, the leader of the party USP that part will form a new coalition. Media on the island therefore believe that the arrest may have far-reaching implications for the relationships that exist between politics, business and the underworld on the island. This hidden relationships forms of Netherlands a serious threat to the security and economy of the countries in the Caribbean part of the Kingdom.