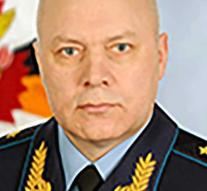 moscow - Igor Korobov, the head of the Russian military intelligence service GROe, died at the age of 62. He had been ill for some time, reports the Russian news agency TASS.

The GROe is under fire internationally. According to the British, the service was involved in the poisoning of Russian former spy Sergei Skripal in England. The US suspects the GROe of interference in the US presidential election in 2016. Russia denies having anything to do with both cases.