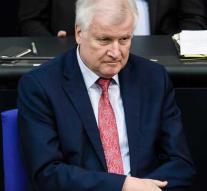 berlin - The German minister of the Interior Horst Seehofer has sent the head of the national migration service (Bamf) to the lane. Jutta Cordt has to leave as a result of a scandal surrounding unjustly assigned statuses to asylum seekers.

The scandal takes place around the office of the migration service in Bremen. The migration service's own research showed that at least 1,200 people received asylum between 2013 and 2016 without being entitled to it. Seehofer thinks Cordt has not adequately responded to this.

Seehofer's step comes at a time when it is rumbling in the coalition because of the migration policy. Seehofer wants to close the German borders for migrants who have already applied for asylum in another country. Merkel is opposed to this and is looking for a European approach.