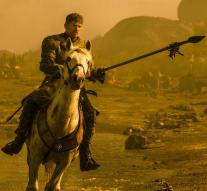 - HBO has offered $ 250,000 (212,000 euros) to the hackers who put online content from the channel last week. That reports The Hollywood Reporter based on a screenshot of an email that the hackers group, who claims Mr. Smith calls, has sent.

The email, which was sent on July 27, suggests that there were negotiations between hackers and HBO. Obviously, they eventually failed because the group had yet to send material from the channel.

It included scripts from Game of Thrones and not yet played episodes of the Ballers and Insecure series.