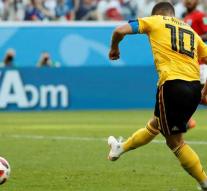 st.petersburg - It looked like an innocent World Cup stunt from the Belgian electronics business: if Belgium were to make more than fifteen goals at the World Cup, all buyers of a 55-inch TV would get their purchase price back. So much has been scored on only two World Cups since the eighties: once by Germany (2010) and once by Brazil (2002).

Still, the time has come: Eden Hazard made the sixteenth goal for Belgium in the consolation finals against England, the most scoring team of the World Championship. And so electronics store Krëfel is in the hair with her hands.

Although? Customers will not receive the purchase price back in cash, but in the form of a voucher, which can be redeemed at the same company. Krëfel, according to a Belgian newspaper, would also be insured, so the damage does not seem so great.

Nevertheless, the cost item is probably higher than 1 million euros. How many TV's were sold exactly does not mean, but a spokesperson said earlier that it was 'several thousand'. The cheapest TV costs 500 euros, and since 'thousands' implies at least 2.000, vouchers will be issued with a total value of 1 million euros or more.

Incidentally, the company responds sportively to social media, and has already applauded all goals.