Home / World / 'Hawking was an inspiring figure for many' 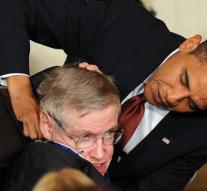 utrecht - 'The Wednesday deceased British physicist Stephen Hawking was a very remarkable person. As a physicist he was very passionate and for everyone with a disability he was a role model. 'According to Nobel laureate and emeritus professor of theoretical physics at the University of Utrecht Gerard 't Hooft in response to the death of Hawking.

'He had very good ideas. His greatest discovery, I think, he did when he was a little younger. He discovered that particles come out of black holes. There he found out by calculating it ', says' t Hooft. The emeritus professor says he always admired Hawking, who suffered from the neurological disease ALS, because he showed that you do not have to give up if you have such a serious condition. 'Respect can still be enforced. '