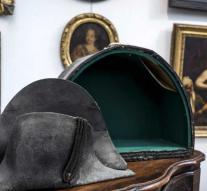 lyon - A hat that the French emperor Napoleon left behind on the battlefield of Waterloo will be auctioned in Lyon on Monday. The so-called stitch was taken away by the Dutch Baron Arnout Jacques Van Zuijlen Van Nijevelt after the defeat of Napoleon in Waterloo.

A private owner got the stitch in 1986 and now offers the headgear for sale. According to the Le Parisien newspaper, experts expect the stitch to yield around 40,000 euros.

European armies defeated Napoleon's army on 18 June 1815. It was banished to the British island of Saint Helena, in the middle of the Atlantic Ocean. There he died in 1821.