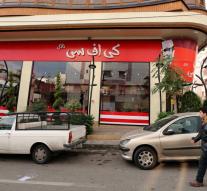 tehran - In Tehran on Tuesday, a branch of Kentucky Fried Chicken opened and immediately closed again. According to the owner the closure was caused by a misunderstanding : the Iranian authorities thought it was a branch of the US fast food chain.

Abbas Pazuki points out that his case Halal KFC hot, Turkish in origin and therefore has nothing to do with the 'real' KFC. " We are Muslims and ", said Pazuki. According to the BBC did Iranian state media that is not all the way through and saw the opening of the restaurant as a sign of the increasing American influence. That Halal KFC for a real Kentucky Fried Chicken was as incidentally is not very strange : the Turkish chain used even mascot Colonel Sanders.