Home / World / Hash with a value of 200 million intercepted 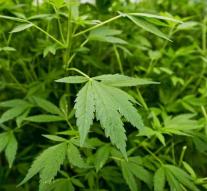 rome - The Italian police found more than 20 tons of hashish in a ship's two fuel tanks with a street value of 150 to 200 million euros. The eleven passengers, all from Montenegro, have been arrested on suspicion of drug smuggling.

The Remus flying the flag of Panama had left the Canary Islands with destination Egypt and Turkey. During the cruise the ship attracted the attention of the Italian authorities because it changed course several times.

With the agreement of the authorities in Panama, the Italian police took control of the ship and brought the Remus to the port of Palermo. In the harbor, the police found 650 jute sacks containing more than 20 tons of hashish.