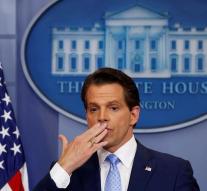 washington - It's not Anthony Scaramucci, former communications director of the White House. On Monday, on the day that President Trump dismissed him, it became known that the prestigious Harvard University had declared him dead in a mail to alumni.

In the mail with associated database are all names of former students. Behind the name of Scaramucci was an asterisk by mistake, as a sign that the former alumnus died. The 53-year-old New York graduate graduated from the Law Faculty in 1989.

Harvard has offered excuses. Unclear is how the error occurred. In a subsequent edition, the error will be corrected. The database is published every five years and is intended for alumni only.

Scaramucci was appointed in July as communications director of the White House. That led to the departure of spokesman Sean Spicer and then from head of staff Reince Priebus. However, after a week and a half, Trump Scaramucci also relinquished the new Chief of Staff John Kelly with a 'clean slate' and gave him the opportunity to build his own team. '