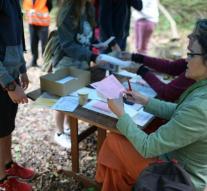 - In June there were 4900 refugees drawn to Germany. That is according to reports from the Federal Police a lot less than the 16,500 the May. The number of migrants moving to Germany, has plummeted compared with last year.

In the first half of 2016 211 000 migrants seek refuge and protection in the Federal Republic. That's less than the month of November of last year, reported Tuesday the Rheinische Post.

Immigration prevents shrinking German population, but is an enormous task. German employers, for example, pointed out Tuesday still in the Mitteldeutsche Zeitung that the integration and training of immigrants is a very difficult and lengthy task. The same goes for finding jobs for these people. They complain that remains to be settled, such as a residence for refugees during their training. They also found that the rules restricting refugees their rights to work, should be abolished. According to the BDA employers' association has nevertheless been one in ten companies with more than 250 employees in Germany refugees hired as employees.