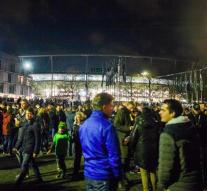 hannover - The soccer fans who had tickets for the canceled exhibition game between Germany and Netherlands get their money back. " The German Football Association DFB will handle it further," explained a spokesman for Hanover 96, the player of the stadium where the match would take place Wednesday increasing. "Anyone who has bought a ticket, of course, entitled to a refund. "

The game was Tuesday canceled a half hour before kick-off due to terrorist threats.