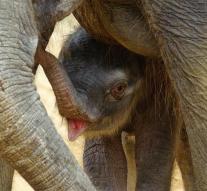 hannover - Keepers of the elephants in the zoo in Hanover, Germany are seriously embarrassed by secretly made video of the animal rights organization Peta. Then we see how the keepers abusing young elephants to do to force them tricks, German media said Tuesday.

Peta was in the autumn of last year secret cameras in the elephant house. The images show how keepers beat the animals with special hooks to teach them to beg for food. Also, a keeper tilt an animal up to the neck on which the elephant screams. Another dikhuidje being beaten on the head. The animals are threatened and beaten them for example to learn to sit their ass.

'Elephants live in Hanover with learned helplessness and daily anxiety,' Peta notes. The management of the zoo says on the films to recognize no hits, but only the use of the special hooks. The animals must be trained because they also contribute to medical problems, according to the zoo.