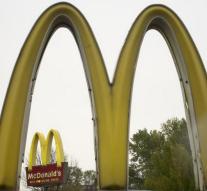 berlin - Unknown people have left a McDonald's in Berlin full of gas. Even before the restaurant in Kreuzberg opened on Thursday, it was discovered and the noise could be blown. A gas bottle with ignition was present in front of the door of the establishment.

The police do not speak of terror. The researchers do not rule out that the action has a political background. 'What the perpetrators were planning to do, we can not say yet. 'Nobody has perished according to the police. The gas bottle was made harmless by specialists.