Home / World / Hamburg gets ready for the G20 summit 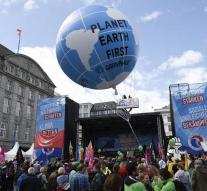 hamburg - The G20 meeting at the end of this week is getting hold of Hamburg. Thus, residents of the German port city will be faced with stringent security measures around the summit. Activists, often left-wing opponents of globalization, have announced protests. The police union says in the German media to worry about irregularities.

'We have a demonstration for the bow where violence is planned. If you read and listen to left-wing media to people from this corner, you should assume that we are facing significant outbursts of violence, 'said Gerhard Kirsch, chairman of the Hamburg Police Union on Monday, against the German newspaper Bild.

On Sunday, protests took place, including Greenpeace environmental organization. The police arrested later when a few hundred left-wing activists illegally wanted to save a protest camp on a peninsula in the River Elbe. A judge had determined that it should be demonstrated, but no camping facilities could be set up. According to German security services, the Hamburg protesters also include left-extremist militants besides antiglobalists.

At the G20 Government, which consists of nineteen major economies and the European Union, 36 official delegations are expected, with approximately 6500 participants. Residents and visitors of the city must consider traffic congestion, such as redirects and closed entrances of metro and train stations. The police set up more than 15,000 agents to lead the summit.