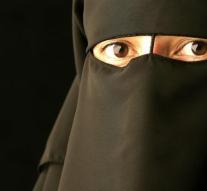 - Not only in France hold the burqa and BURQINI churning the minds. In Britain leads the revealing costume discussion. More than half of Britons want a burqa ban and slightly less than half would ban the beach BURQINI variant.

This is evident Thursday in a poll by the British research firm YouGov among 1 668 respondents.

57 percent wants the prohibition of the burqa, the garment for Muslim women which covers the body including face. But 25 percent are against such a ban..


The BURQINI leads to something less resistance. Still, 46 percent support a ban on the swimsuit. 30 percent are against a ban.

It is striking that especially older Britons are calling for a ban on both garments. 78 per cent of over-65s for a burqa ban and 63 percent for boerkiniverbod. In younger Britons, between 18 to 24 years, those percentages are significantly lower. Respectively 34 and 26 percent.

In other countries research firm YouGov held a poll on a burqa ban. In Germany, 62 percent support a burqa ban, compared with 29 percent against. In the US, 59 percent against a ban and speaks only 27 percent in favor of a ban on the burqa.


There is currently no law banning burqas in the UK.