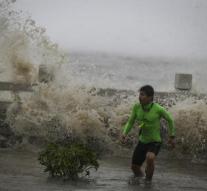 - China had to evacuate half a million people from the southern island of Hainan before Typhoon Sarika there Tuesday came ashore. The typhoon is accompanied by torrential rain and winds with speeds of up to 162 kilometers per hour.

Rail traffic has been shut down Monday and 250 flights were canceled, reports the Chinese news agency Xinhua. Schools and tourist attractions are closed.

Especially fishermen and other residents of low-lying areas were evacuated.