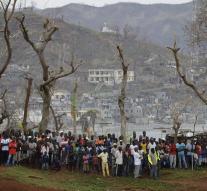 port - Haiti Holds on November 20 the postponed presidential elections. Has announced that the chairman of the electoral council Friday. The elections, which take place on October 9, was postponed because of Hurricane Matthew.

It is the first round of elections. If neither has an absolute majority of candidates, following on January 29, a second and decisive round.

Matthew hurricane struck the southern coast of the impoverished country on 4 October. Certainly thousand people were killed. The damage is huge.