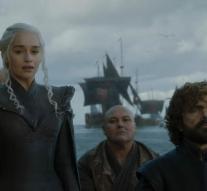 - HBO has become the victim of hackers. In any case, one script of a Game of Thrones episode and two unpublished episodes of Ballers and Room 104 have been launched online, reports an American entertainment site.

The hackers claim to have stolen a total of 1.5 terabyte data from HBO. The transmitter only confirms to Entertainmentweekly that there is a leak and that it is being investigated. The perpetrators say they want to put 'more material' online.

Under the material is the script of next week's episode of Game of Thrones. The hits series has been more frequent with hackers in the past. For example, the first four episodes of season five were launched online in 2015. Since then, all kinds of additional security measures have been initiated.