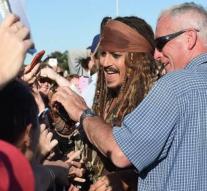 - Hackers claim to have a copy of the fifth Pirates Of The Caribbean in charge and threaten to leak the movie if Disney does not pay.

The CEO of Disney, Bob Iger, has informed his employees about the hack. He did not mention the name of the film, but Deadline says that it's about Dead Man Tell No Tales. The fifth part of the film series with Johnny Depp in the lead will be released in theaters on May 26th.

Disney would refuse to pay and collaborate with the FBI to detect the hackers. That threatens to make the movie a little bit bit online, as the days when the movie studio does not pay expires. How much they claim is not known.