Home / Tech / Hackers Anonymous fight against IS on 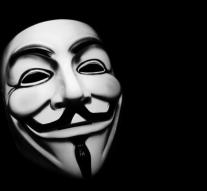 - Anonymous carries out the fight against the terrorists of Islamic State (IS) in response to the attacks in Paris. The hacker group announced in a video message ' massive cyber attacks ' on.

" Anonymous members from all over the world will chase ", says one French-speaking masked man in the video, on YouTube. " We will trace you and not let go. This is our biggest operation ever. Expect massive cyber attacks. It's war. Brace yourself.

The French people is stronger than you and will emerge stronger from these atrocities. " It is not the first time that Anonymous IS takes on the grain. After the attack on the satirical magazine Charlie Hebdo in January sounded similar threats. The hackers have since then more than 100 000 Twitter accounts published by IS used to disseminate propaganda and nearly 6 000 IS videos from youtube them removed.