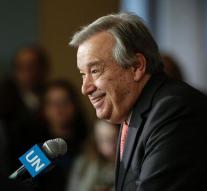 - The UN Security Council on Thursday formally nominated the Portuguese António Guterres as successor Ban Ki-moon as Secretary-General of the United Nations. Wednesday it was announced that Guterres would be. Thursday, followed by a final formal vote.

The fifteen members of the Board were unanimously agreed the resolution in which the nomination is recorded. The UN General Assembly will meet next week to accept the nomination and approve the appointment of the 67-year-old Portuguese. Ban (72) he will resign at the end of this year after two terms of five years has been in charge of the UN.

Guterres was between 2005 and 2015 United Nations High Commissioner for Refugees at the UN. Previously he was Prime Minister of Portugal on behalf of the Socialist Party.

Ban Guterres called a 'super choice. '' I'm sure he is fully committed to all the major challenges of strengthening peace operations to achieve sustainable development, the preservation of human rights and alleviate human suffering, 'said Ban in Rome.