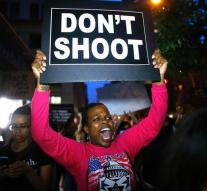 - The man who last week shot and killed five officers in the US city of Dallas had plans for more attacks. That the police chief of Dallas, David Brown, said Sunday on the CNN program State of the Union.

According to Brown Micah Johnson was practicing with the manufacture and use of explosives. During a search, police found a lot of explosive material. If Johnson could have used would have been the consequences,, devastating '.,, We are convinced that this suspect had other plans, '' Brown said.


Johnson was killed after the shooting. He was knocked out by police with an explosive mounted on a robot. Johnson had said during the failed negotiations with the police that he was angry about police violence against blacks. He wanted to punish whites, especially police officers.

But, said Brown, Johnson plans were advanced last week when two black men in Minnesota and Louisiana, by police bullets were killed. Possible Johnsons has passed or earlier action by those incidents.