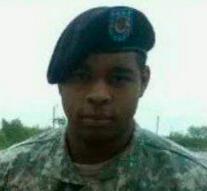 dallas - Micah Xavier Johnson, the suspect in the fatal shooting in Dallas, acted according to the mayor of the American city alone. That Mike Rawlings said Friday at a news conference.,, We are confident that the city is now safe and the suspect dead, and that we can focus on healing, '' said the mayor.

At the same press conference said Greg Abbott, the Texas governor, however, it remains important to determine whether Johnson had no accomplices. Also, the prosecutor of Texas, Ken Paxton, did not say definitely whether the murder of five agents was the work of one or more shooters.

At the invitation of Mayor Rawlings brings US President Barack Obama next week visiting Dallas. Reported that the White House Friday (local time). Obama is currently in Poland for a NATO summit and return Sunday evening back to Washington. That means he will shorten his visit to Europe one day.