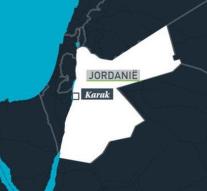 kerak - Armed men on Sunday several police patrols in the city of Kerak in Jordan came under fire. Security sources speak of at least five doden.Onder the victims are several police officers and a Canadian Toeriste.

According to sources, the attackers barricaded themselves in an old castle, a tourist attraction in the mountain town. The attackers were chased into a field at the old castle in the city. The police closed the roads and elite troops deployed to identify the gunmen.

A militant action is not ruled out, told the sources. The Jordanian authorities have not yet officially responded.