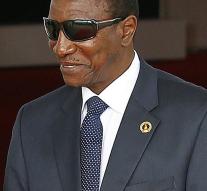 - The first free presidential elections in Guinea in almost sixty years have yielded a victory for incumbent President Alpha Condé . He may lead the West African country into another five years , it emerged Saturday after the counting of the votes .

The opposition does not recognize the election because of fraud had been committed . " The election was a charade ", said the main opposition leader Cellou Dalein Diallo , soon . According to him, were allowed into the city of Labe example, only people at the polling booths which had voted for the incumbent head of state five years ago.