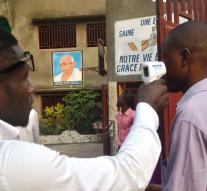 - The seven members of the opposition on Sunday to participate in the presidential elections in Guinea , saying they will not accept the outcome because of fraud. According to the candidates, including the main opposition leader Cellou Dalein Diallo , there are numerous irregularities observed during the polls.

The population of the West African country could Sunday for the first time since 1958 back to the polls for free presidential elections. It is expected that incumbent President Alpha Condé for another five years sit on the plush. Observers expect that his competitors will be the boss. The results are expected within days.

The statement of opposition to the tensions in the country is likely to increase. Guinea has a history of violence around elections.

According to Diallo were not all voters who were registered in the town of Labe to vote actually do so. Only people who voted five years ago, when Condé was first elected, received a voting card.

"The election was a charade. Under these conditions, we demand again that the election is invalid, because we can results that emerge from this process does not recognize", Diallo said.

The government has not yet responded to the allegations.