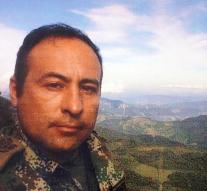 bogota - The second largest guerrilla group in Colombia, the National Liberation Army (ELN), has paved the way with the release of a kidnapped politician for peace negotiations with the government.

Odín Sánchez, who was captured by Marxist rebels in March 2016, Thursday was handed over to representatives of the Red Cross. His release was the precondition for peace negotiations. Which begin next Tuesday in the Ecuadorian capital Quito.

The Colombian government signed earlier peace with the FARC, after a civil war of more than fifty years. President Juan Manuel Santos was there last year, the Nobel Peace Prize for. The approximately 6,000 remaining fighters of the FARC are about to hand in the weapons. The ELN has 1,500 to 2,000 fighters significantly smaller. An agreement with the ELN is important to prevent the ELN former FARC areas and drug trafficking takes over there.