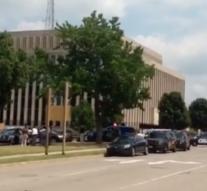 - In a shooting at a court in the US state of Michigan are two court guards and the suspect shot. A policeman was injured, as US media report.

The shooting took place around thirty local time in Berrien County Courthouse in St. Joseph. According to a sheriff suspect someone grabbed his gun and started shooting them.

One policeman was wounded in the arm and finger.


Nothing has been known about the identity of the perpetrator or his motives.