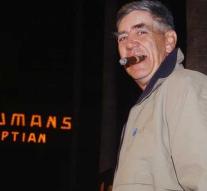 los angeles - R. Lee Ermey, known from Full Metal Jacket, died at the age of 74. That made his manager known Sunday.

Ermey was a sergeant in the American army in his younger years and was regularly cast as a military or policeman after his transfer to Hollywood. He was seen as Major Tilman in Mississippi Burning, sheriff Hoyt in the Texas Chainsaw Massacre remake, General Platt in Body Snatchers and as a police chief in Se7en. For his role as Guardian Hartman in Stanley Kubrick's Full Metal Jacket he was nominated for a Golden Globe.

Even in his work as a voice actor Ermey often got roles from men with authority: he spoke the toy army leader Sarge for the Toy Story films, and was the voice of the prison bait in SpongeBob SquarePants.

According to his manager, the consequences of pneumonia were fatal to the actor.