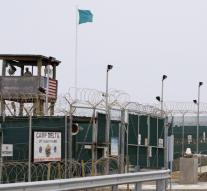 - The US government has still time to close the prison for terrorism suspects at Guantanamo Bay Naval Base before President Barack Obama leaves the White House. A spokesman announced on Friday that we continue working on the transfer of prisoners to other countries.

US talking to countries about the 53 detainees eligible for transfer, according to the White House. Some transfers occur at the end of this year instead. " It is absolutely possible. It's something we're working on very hard. "

Obama promised when he took office in January 2009 that he would close Guantanamo. Netherlands refuses despite American insistence to take prisoners.