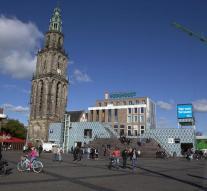 groningen - Student association Vindicat atque Polit from Groningen may hold the annual launch period next month, but under strict conditions. For example, half of the supervisors may not drink alcohol and first-year students remain alcohol-free. This is evidenced by a new report with strict agreements between university, college and student association.

After incidents last year, it has to be stirred within a year. Last year, degeneration photos of raw treatment of aspirants first appeared. There followed rumors about a banglist (a hit list with dubious 'appreciation' of students). An older year-old went to the head of a younger student in August 2016, who suffered head injury.

This never again became the motto. In practice, therefore, this means less drinking and student wrestles will be combating sexism or a too hard approach to first-year students. Physical contact may not be at all. If it does not matter, incidents should be used; If necessary follow declarations.

This summer is valid as a test. Martin Sitalsing, chairman of the committee, sees it, although much has to be done. Vindicat shows she wants it herself. We found members with a big mouth, but our message was also seen by them. '

In addition to less drink, there is more openness. Rector Stijn Derksen. 'We remain a private association, but no longer closed. A silence clause has been abolished. '

That clause meant that first-yearers had to say to the outside world about their unfruitment, even or even if they were on a nasty experience. Derksen: 'It must be fun without discrimination or sexism. The conversation got well after the incidents. '