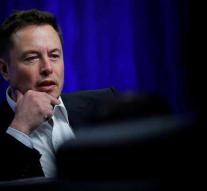 los angeles - A British diver who has been called out for pedophile by Elon Musk, is filing a lawsuit. Vernon Unsworth accuses the Tesla chief of slander, according to court documents. He claims, among others, a compensation of 75,000 dollars (more than 64,000 euros) at the court in Los Angeles.

Musk has repeatedly pulled out to the Briton, who this year played an important role in the rescue of a group of children from a cave in Thailand. Musk then offered a mini-diving boat for the rescue operation. Unsworth then told CNN that the use of such a machine would have no use whatsoever. He called Musk's offer a 'PR stunt. '

The criticism shot Tesla boss completely wrong. He made the savior on Twitter for 'pedo. 'He also called it suspicious that a Brit lives in Thailand. Musk later said he regretted the outburst, but then again depicted Unsworth as 'child rapist' in an e-mail to a reporter.