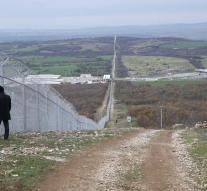 sofia - The Bulgarian fence along the border with Turkey is almost ready. Alongside this 259 kilometer long external border of the European Union, only barriers to illegal crossing over the last 21 kilometers must be built, said Interior Minister Valentin Radev on Friday in parliament.

The European Union has allocated 160 million euros to Bulgaria for the construction of the border gate. According to the minister, this surveillance of the border provides 'reliable protection against migrant pressures. 'Compared to last year, it declined by a factor of ten,' said Radev.

In the poorest EU country Bulgaria, approximately 4500 migrants live in shelter centers, which are 40 percent vacant. Bulgaria was slightly outside the so-called Balkan route for refugees to Western Europe, which has been closed since March 2016.