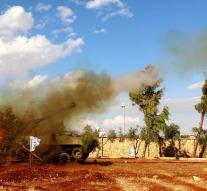 aleppo - A tank grenade Monday struck the top floors of the UN office in the west of Aleppo. The top UN representative in Syria, Ali Al-Za'tari, said in a statement 'repugnant' that the office, the location of which all parties have to be known, came under fire. The statement did not mention whether people have been slain or injured by the impact.

Rebel groups have in recent days launched an offensive against the west of Aleppo. They hope to break a siege of the eastern half of the city, where an estimated 275 000 civilians and 8,000 insurgents were surrounded by troops of the regime of President Bashar al-Assad.

In residential areas in western Aleppo are more than forty people according to the UN slain and hit many more injured by rockets seemingly random were shot. The UN condemned the increased violence in eastern and western Aleppo strongly.