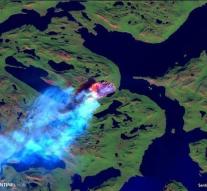 moscow - Greenpeace warns about a large tundra fire in Greenland. The fire rages in an area of ​​12.5 square kilometers at about 150 kilometers from the Polish Circle. 'Such a fire, so northern, has not been observed before,' reported the environmental organization Tuesday.

The flame sea had been discovered by Greenpeace Russia, which uses a satellite system to detect such fires. The fire has been raging for a week now. 'Due to the changing climate, we will see more and more of these types of fires in places they did not previously encounter,' said the organization.

According to a spokeswoman for Greenpeace, such fires include the risk that much CO2 will be released. Also, soot particles can end up on the ice, which smells faster.