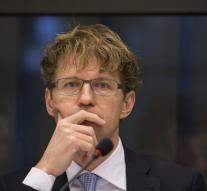 - It is still not completely closed for the new Media Act of State Sander Dekker (Media). The Senate has yet to deal with the bill, but Tuesday will again ask questions. The senators did before, but especially CDA and PvdA remain critical.

Dekker wants the bill into force next year. That means the Senate no later than December 22 should discuss the proposal and to vote on it. That's the last day the senators this year come together.

It is on the answers Decks have or planning work, let CDA senator Joop Atsma know. " Due diligence is paramount. The last time he already gave his answer within half a day, but they were in my standard answers ready layers. He really should discuss the matter go ", said Atsma.

Main point of criticism is the effect that gets the Minister in their eyes on the broadcasting and content of programming.