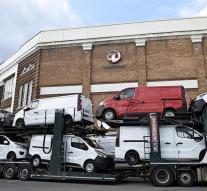 brussels - The French car manufacturer Peugeot may unconditionally take over the German Opel. The European Commission, after investigating national and European markets, has no concerns about distortion of competition through the acquisition.

Peugeot S. A. makes and sells passenger cars and light commercial vehicles worldwide under the names Peugeot, Citroën and DS. Opel, now owned by General Motors, is in the same segment with the Opel and Vauxhall names.

According to the committee, the market share of the two companies remains relatively small. Only in Estonia and Portugal, they reach 40 percent for small vehicles, but that percentage increases after the acquisition by no more than 5 percentage points in both countries, Brussels thinks.

The investigation also indicates that they can expect combined competing from other manufacturers, including Renault, Volkswagen, Daimler, Ford, Fiat and cars from Asia.