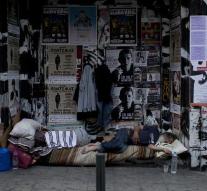 athens - The financial crisis has less than 427,000 Greeks moved to seek refuge elsewhere. Since 2013 is a migration, the third in more than a century, begun by more than 100,000 people. Since 1907, 1.8 million people have left the country in search of a better life.

This time it is according to a study published Saturday by the Greek central bank to a 'brain drain'. A lot of talent, academics and professionals, whose training has cost the government a lot of money left. The end seems in sight. Unemployment remains high. Among young people is 50 percent looking for a job. Their outlook is grim despite all diplomas. Athens is already talk of a lost generation.