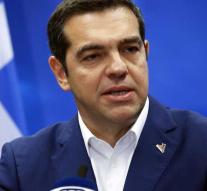 skopje - Greece has responded with delight to the first round of voting on the name change of neighboring Macedonia. The Macedonian parliament voted Friday night with the new name Republic of Northern Macedonia. The majority of two thirds needed to implement the name change in the constitution was met exactly: 80 of the 120 deputies agreed. The change is not yet final, because more voting rounds will follow.

Greek Prime Minister Alexis Tsipras calls it 'a big step towards our joint success. It is a very important step towards a peaceful and prosperous future for our peoples. 'Commissioner Johannes Hahn (Enlargement) also spoke of' a great day for democracy in Skopje 'and congratulated everyone who has decided to follow the EU path. '

Macedonia and Greece have been bogged down over the use of the name for years. The country broke away from Yugoslavia in 1991. Greece attaches great importance to the name, since the northern Greek region where the renowned king and warlord Alexander the Great came from is called Macedonia. The issue may stand in the way of joining the EU and NATO, as Greece can veto it.

Within the United Nations, Macedonia is forced to name the 'Former Yugoslav Republic of Macedonia. '