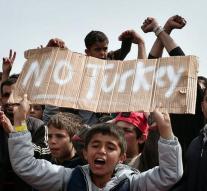 athens - Greece, along with the organization that has been monitoring the EU's external borders (Frontex), has returned 71 migrants to Turkey since Wednesday. The returned refugees came from the islands of Chios, Lesbos and Kos.

The return of refugees to Turkey results from an agreement between the EU and Ankara. In March last year it was agreed that Turkey will return illegally traveled to Greece. The EU would then include as many refugees from Turkey in a legal manner. Ankara would also be compensated in other ways, such as the abolition of visa requirement for Turks.

The Greek police reported on Saturday that 1165 people have been reduced under the European Turkish agreement. On the Greek islands in the east of Aegean, around 14,000 refugees or migrants are stranded.