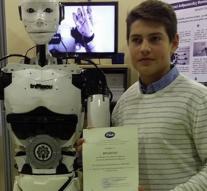 - The 15-year-old Dimitris Chatzis Greece has managed to own a working robot to tinker together. All components come from the 3D printer and the whole project took him a year. Affectionately got the robot named ' Troopy.

Hatzis is not the first to build Troopy but the youngest. Several engineers preceded him, including the creator of the blueprint. There had Hatzis is frequent contact with it during the construction project.

Troopy is as big as an adult, can themselves look around and move his arms, and can also carry on a conversation in fluent English.

But this is just the beginning ; The young programmer expects the robot in the future will have many more features.