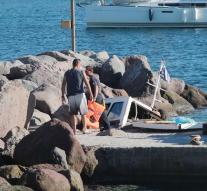 athens - The driver of the speedboat on Tuesday at the Greek island of Aegina is suspected of a tourist boat landing manslaughter. The Greek public prosecutor keeps the 77-year-old skipper responsible for the death of four persons on board, including a five-year-old girl, report Greek media.

On leaving the court Wednesday, the skipper was booed and harassed by angry people. Among them was the mother of the killed girl, who lost her husband in the collision.

Of the sixteen people were injured in the collision, there are still three in the hospital. The cause of the accident is under investigation. According to eyewitnesses enter the speedboat too fast.


Aegina is less than an hour by boat from the Greek capital Athens and draws in the summer a lot of Greek and foreign visitors.