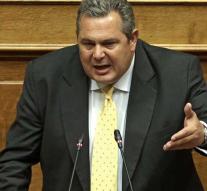 athens - The publisher, the director and editor-in-chief of the Greek newspaper Filelefteros were arrested Saturday in Athens. According to Greek media, Minister of Defense Panos Kammenos had filed a complaint against the three.

Filelefteros gave a comprehensive review on irregularities in the spending of European money that was intended to improve living conditions in refugee refugee camps. The Ministry of Kammenos is responsible for this. According to the newspaper, some of the money would have gone to business people who have close ties with the minister.