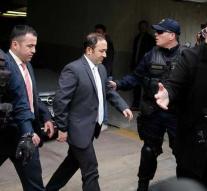 athens - A Greek court of appeal has rejected a Turkish request to deliver eight soldiers. Ankara suspects them of involvement in the failed coup, the theft of military equipment and desertion. It was the third time that Turkey asked for the extradition of the military.

The case has put pressure on the relationship between NATO allies Greece and Turkey. The military had fled to Greece in July 2016 with a helicopter. This happened after it became clear that rebellious soldiers would not succeed in ousting the Turkish government.

The Turkish authorities want to try the soldiers who have fled, but they also fired before the court. The Greek court ruled Friday that the charges are too vague. The judges also feared that the military would not receive a fair trial in their home country. You can still appeal against the decision.